Alexander Dumas and Napoleon I 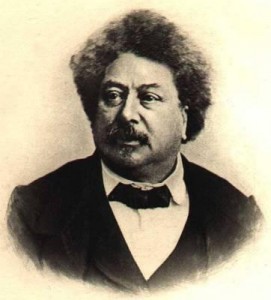 A French writer, best known for his numerous historical novels of high adventure which have made him one of the most widely read French authors in the world. Many of his novels, including The Count of Monte Cristo, The Three Musketeers, Twenty Years After, and The Vicomte de Bragelonne were serialized. He also wrote plays and magazine articles and was a prolific correspondent. (From Wikipedia.)

Napoleon I
Emperor of the French

Ambition is never content,
even on the summit of greatness.

Napoleon Bonaparte was born on August 15, 1769 in Ajaccio on the Mediterranean island of Corsica. Through his military exploits and his ruthless efficiency, Napoleon rose from obscurity to become Napoleon I, Empereur des Francais (Emperor of the French). He is both a historical figure and a legend—and it is sometimes difficult to separate the two. The events of his life fired the imaginations of great writers, film makers, and playwrights whose works have done much to create the Napoleonic legend.

Napoleon decided on a military career when he was a child, winning a scholarship to a French military academy. His meteoric rise shocked not only France but all of Europe, and his military conquests threatened the stability of the world.

Napoleon was one of the greatest military commanders in history. He has also been portrayed as a power hungry conqueror. Napoleon denied being such a conqueror. He argued that he was building a federation of free peoples in a Europe united under a liberal government. But if this was his goal, he intended to achieve it by taking power in his own hands. However, in the states he created, Napoleon granted constitutions, introduced law codes, abolished feudalism, created efficient governments and fostered education, science, literature and the arts.

Emperor Napoleon proved to be an excellent civil administrator. One of his greatest achievements was his supervision of the revision and collection of French law into codes. The new law codes—seven in number—incorporated some of the freedoms gained by the people of France during the French revolution, including religious toleration and the abolition of serfdom. The most famous of the codes, the Code Napoleon or Code Civil, still forms the basis of French civil law. Napoleon also centralized France’s government by appointing prefects to administer regions called departments, into which France was divided.

While Napoleon believed in government “for” the people, he rejected government “by” the people. His France was a police state with a vast network of secret police and spies. The police shut down plays containing any hint of disagreement or criticism of the government. The press was controlled by the state. It was impossible to express an opinion without Napoleon’s approval.

Napoleon’s own opinion of his career is best stated in the following quotation:

I closed the gulf of anarchy and brought order out of chaos. I rewarded merit regardless of birth or wealth, wherever I found it. I abolished feudalism and restored equality to all regardless of religion and before the law. I fought the decrepit monarchies of the Old Regime because the alternative was the destruction of all this. I purified the Revolution.